The Medicare Part D Drug Plan Donut Hole Is Closed. What Does That Mean?

Just about every Medicare beneficiary has heard about the donut hole in a Medicare Part D drug plan. Many will admit they don’t understand it but they all know it means drugs will cost more.

Now, they’ve heard that the donut hole closed on January 1, 2020. They are ecstatic because they believe their drugs will be free. And, once again, it’s likely they don’t understand what’s happening.

The donut hole is closed, but drugs won’t be free!

1.   Deductible: The standard deductible in 2020 is $435. This is the amount you pay out-of-pocket before the plan starts paying. A plan can choose to charge no deductible or any amount up to $435. This year, there are only two national plans with no deductible and the monthly premiums for those plans are about $35 and $70.

5 Pillars To A Strong Retirement

2.   Initial Coverage: By design, a beneficiary pays 25% of the cost of medications in this stage. Most plans choose to charge a copayment (a fixed amount such as $3 or $10). Once the amount that the individual and plan have spent reaches $4,020, the beneficiary enters the next stage.

3.   The Coverage Gap, a.k.a. the donut hole: By design, the beneficiary is responsible for most or all of the costs in this stage. In the early days of Part D drug plans, those who landed here had to pay 100% of the cost for every drug. Some beneficiaries could not afford this so they quit taking their medications.

Then, the Affordable Care Act provided discounts. In 2012, the discount for brand-name drugs was 50%, and, for generics, 14%. Every year since, discounts gradually increased until the donut hole closed completely in 2020.

Once the beneficiary’s true (total) out-of-pocket costs (what the individual has paid) reach $6,350, it’s on to the last payment stage.

4.   Catastrophic Coverage: About 3.7 million Part D plan members will reach this stage in 2020. The individual pays the greater of 5% or $3.60 for generic medications and $8.95 for brand-name drugs. There is no maximum amount or cap on how much one will pay.

Once the year ends, the cycle resets and the costs are adjusted for the new year. 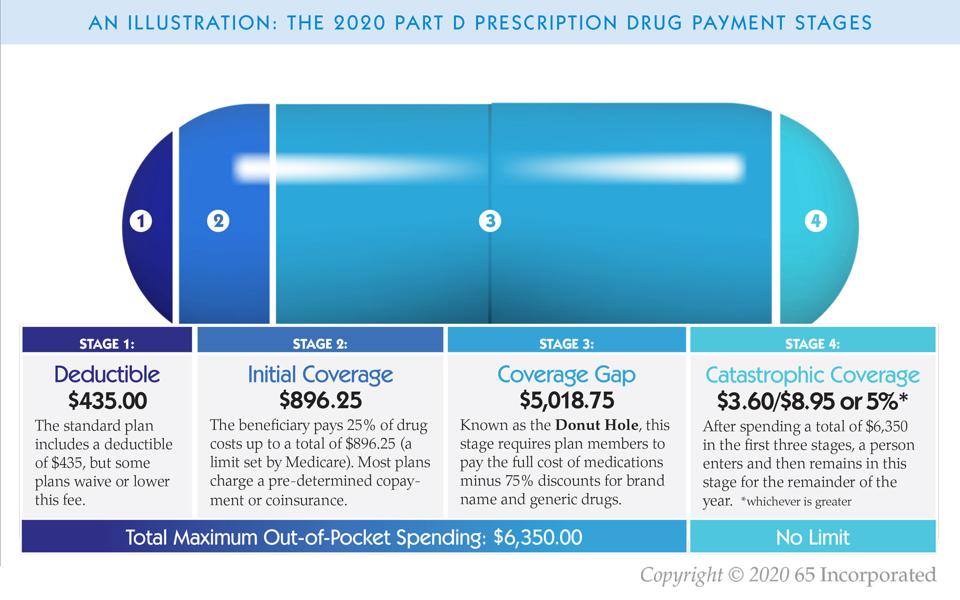 The donut hole is closed but drugs won’t be free. There’s a 25% discount in the donut hole, but many will still pay more for their medications.

Do You Need a Covid-19 Vaccine Booster Shot? What to Know